OUR SPOTLIGHT TODAY TURNS TO RYAN HOVLID WHO CURRENTLY PLAYS WITH THE PRESCOTT STORM. RYAN'S OLDER BROTHER BRADLEY HOVLID LEFT SOME BIG SKATES TO FILL BUT THAT DOESN'T INTIMIDATE RYAN!  BRADLEY WAS ARGUABLY ONE OF THE TOP PLAYERS IN HIS AIHA ERA BACK IN THE EARLY 2000'S. NOW IN HIS first YEAR OF 10U, MANY OF US WHO REMEMBER BRADLEY AND HIS SKILLS ARE EXCITED TO SEE RYANS SKILLS GROW AS HE GETS OLDER. 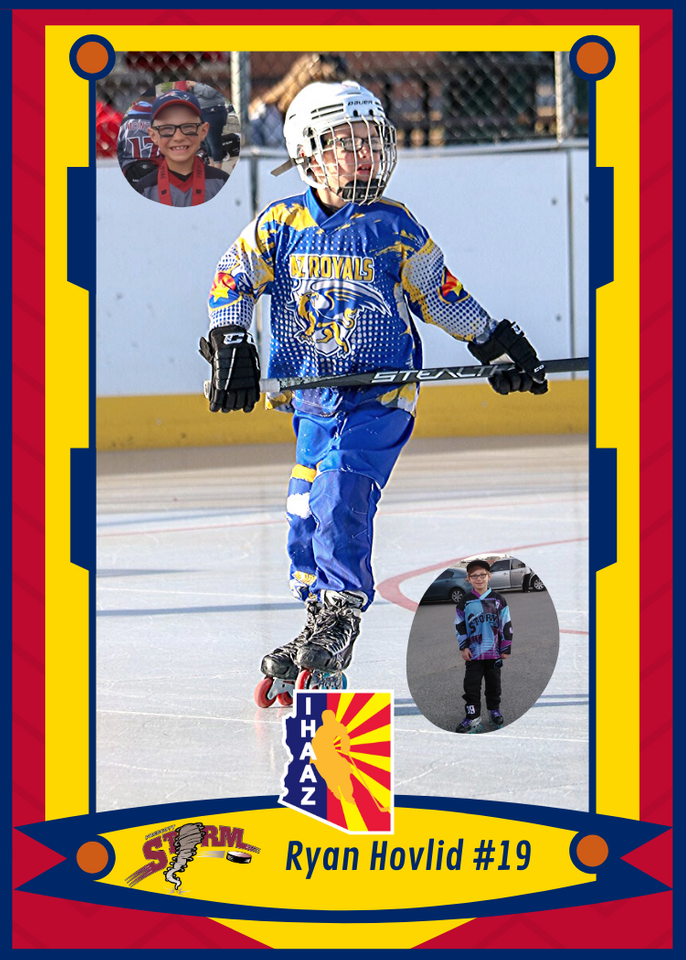 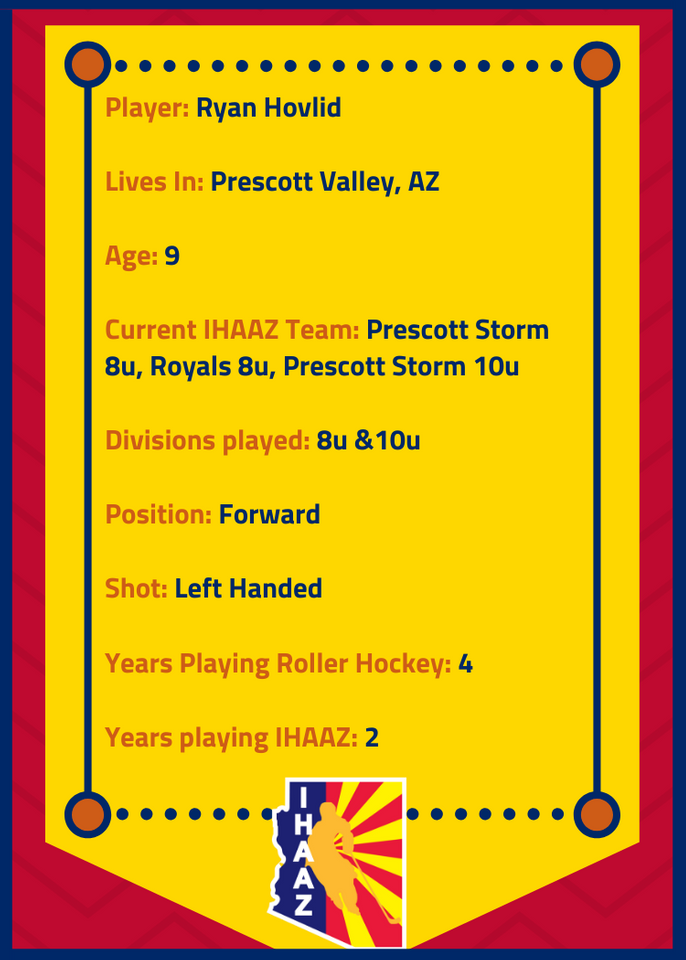 WE ASKED RYAN  A FEW ADDITIONAL QUESTIONS TO THOSE ON HIS IHAAZ CARD, HERE'S WHAT HE HAD TO SAY:

IHAAZ - How do you get involved in playing roller hockey

Ryan - The first goal I got when we were losing 7-0 and I scored on what I think is a hard team to beat- the Knighthawks, that was the only score we got that game and it ended 7-1.

Ryan - When me and Rowan, Sloan, and Preston made a train skating with hockey sticks in Yuma and chilling with my team!

IHAAZ - Who is your favorite IHAAZ teammate to play with and why?

IHAAZ - Do your teammates have a nickname for you? If so what is it?

Ryan - My nickname is Ry Ry.

IHAAZ - Do you remember scoring your first IHAAZ goal? Tell us about it?

Ryan - I think it was on a breakaway in Lake Havasu ,my first travel season with Storm?

IHAAZ -  Who is the hardest team for you to play against in IHAAZ and why?

Ryan - The Knighthawks, cause they are a good, tuff team and I haven't beat them!

IHAAZ - Some people might not know that when he was your age, your older brother Bradley Hovlid used to play in IHAAZ when it was called AIHA. Bradley was one of THE BEST players in his age devision every year. I'm sure you've heard all about him. Does your brother inspire you to get better and someday be as good as he was when he was playing?

Ryan - Yes, I remember when I was younger, I wanted to play like him and be a great hockey player. I was his biggest fan! I watched Bradley play roller and ice, he's my hero and I love him!

Ryan - Most proud was when coach Nick Paris gave me the fire fighter helmet, it was like getting a medal only better cause it took me a long time and a lot of hard work,I was ecstatic and finally earned the chance to take it home for a job well done listening to him! I really want to get faster and body up more to get in front of the puck!

IHAAZ - If we asked your coaches to give us their favorite thing about you and the thing that drives them the most crazy about you, what do you think they'd tell us?

Ryan - I think they would say, I'm fun and I listen to them and try to do my best, some say I look good on the rink and in practice they use me as the example of what to do correctly. And they would also say, I'm too hard on myself and overthink stuff sometimes that causes me to get frustrated, then tell me it's okay to make mistakes that's how we learn! (Great coaching advice!)

So at this point we usually ask the interviewers coach how they'd answer it but since we know how much his brother Bradley means to him, we decided to ask Bradley the same question on this one. This is what he said:"The aspects that I love about Ryan as a coach and as his brother is that he gives it his all every shift that he is out on the rink, contributing to the team anyway he can whether it be scoring a goal, setting up a teammate, or my personal favorite having grindy board battles whenever possible. It is just such a blessing to be able to see him playing in the same league that I grew up playing in. Something that drives me nuts about Ryan is that he brings home a lot of emotion after games especially a loss rather than leaving it all out on the ice. But as most of us athletes do we take that emotion and energy and turn it into motivation, which is exactly what Ryan does, striving  to become a better hockey player."

Ryan - Everything! Traveling with my family and hanging out with my team,I love hockey and miss my friends! I miss playing hockey!!

IHAAZ -  So like the rest of us, you are missing your teammates the most right now. They might be reading your interview so what would you like to tell them all?

Ryan - Miss you guys, hope you are all good and hope this is over soon so we all can play the game we love!