Today our spotlight shines on Riley Cade Peterson from the Tucson JR. Wildcats. Riley has been turning heads with both his play and his occasional spirited goal celebrations in the 10U and 12U age groups this season. As you'll read below Riley is missing hockey something terrible right now and really really wants to start playing again. We love his enthusiasm and can't wait to see what all this pent up hockey engery translates into the next time he gets to play! 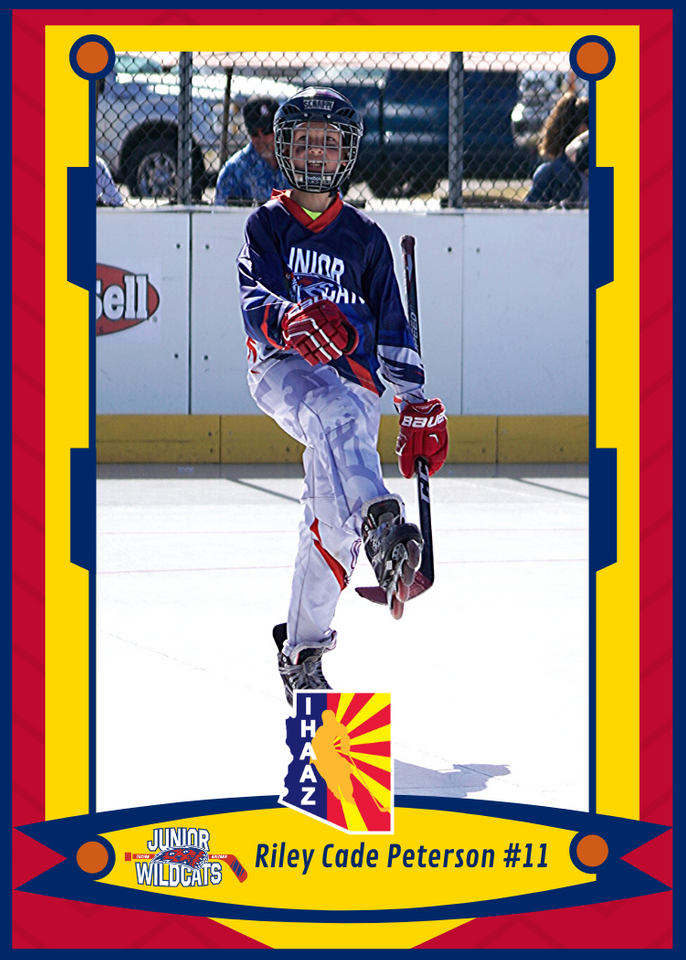 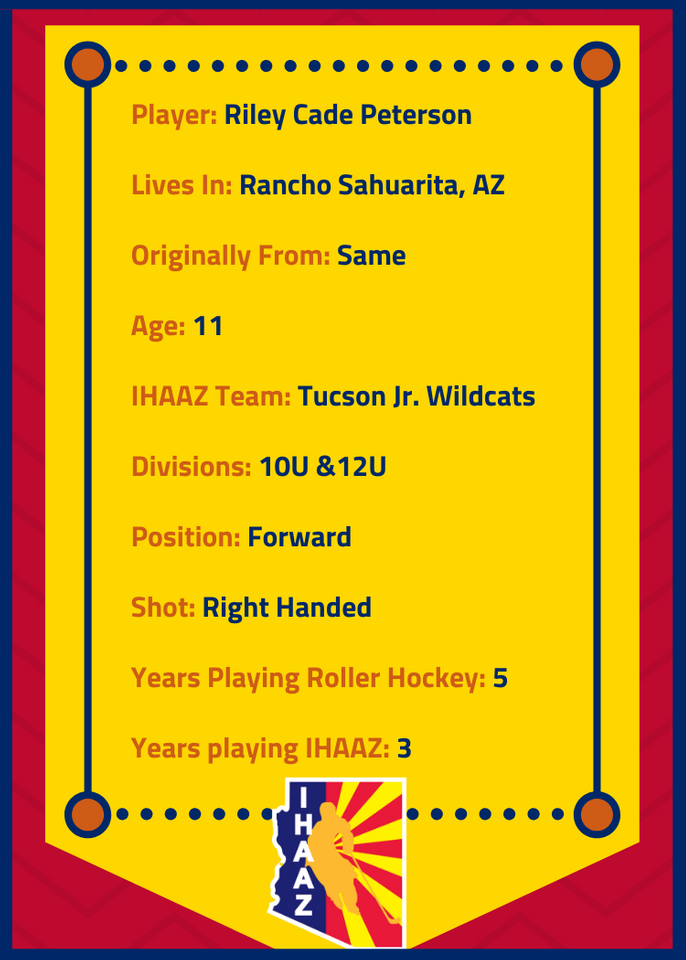 WE ASKED Riley A FEW ADDITIONAL QUESTIONS TO THOSE ON his IHAAZ CARD, HERE'S WHAT HE HAD TO SAY:

Riley - Most of the Junior Wildcats players crammed into the RV in Prescott.

Riley - My funniest IHAAZ memory was when our player fell down in front of the bench and we got a penalty for too many players on the rink.

IHAAZ - Who is your favorite Jr. Wildcats teammate and why?

Riley - Gavin Molina. He always makes the team happy and motivated. I like his sayings!

IHAAZ - Who do you least look forward to playing against at each IHAAZ festival?

Riley - Knighthawks because they pass really well, and they are hard to defend.

IHAAZ - What team do you enjoy playing against in IHAAZ the most and why?

Riley - ANYONE right now!! (we hear you Riley!)

Riley - Favorite-I do not get tired easily. Drives them crazy--I take too many slap shots

So, we actually asked Riley’s Jr. Wildcats coach, Josh Smith the same question and this is what he said: “My favorite thing is his skating. He's fast in any situation. Straight lines, out of turns, stops and starts, with or without the puck. Especially if he has the puck and gets a couple linear crossovers in, he blows past people. What drives me nuts? It's his selection on when to take a slapshot. He's 10 so it's should be never, but that's not realistic.

IHAAZ - You have been part of a good amount of goal scoring during the 2 festivals we've been able to play so far. You're #2 in points and #2 in assists for 10U and top 5 for goals scored in 12U. Those are some pretty impressive stats, especially in an eight team 12U division. Do you have to adjust your play a lot between the two age groups at all and do you have different roles on each team?

Riley - I’m excited that I’m #2 in assists!  I’ve been trying to do better in assists!  Whose number 1? (that would be Knighthawks player Landon Jans who is currently leading 10U overall points and assists, Gavin Molina leads in goals). The offensive play is different in each age group. In 10u we try to move to score right away and in 12u we are coached to reset and to separate the defense.

IHAAZ - In the goals that either you have scored or ones you helped on, there have been some pretty good individual goal celebrations I’ve seen you throw out there (see Riley's card for one of them). Do you plan these out ahead of time or just get caught up in the moment?

Riley - I practice my cellys at home! Usually when I score on my brother! Lol

Riley - We transformed my garage to a hockey rink with a shooting tarp. When I’m not in there I do schoolwork and hanging with my crazy brother and sister.

Riley - Literally everything--but I really miss all my friends (teammates and on all teams).