The IHAAZ spotlight is back in Yuma today where it shines on 14U Blaze player Matthew Boelts. There are all kinds of hockey players; tall ones who get size advantage early, ones blessed with natural skill who seem to do everything effortlessly, the hard worker who makes up for lack of skill with grit and determination, and then there's the thinkers, those that try to deconstruct what works and doesn't and learn from it. Matthew has his own skills for sure, but the last one of those players is where he resides. His mind looks at the game (both his own, his teammates, and his competition) in ways that are often overlooked. Matthew will often times have very intelligent observations about the game, and he's not afraid to let you know about them either. For those smart enough to listen, he's usally on to something. He has a great outlook on the game which is basically this: Hockey should be fun, and if it is, the rest will work itself out! 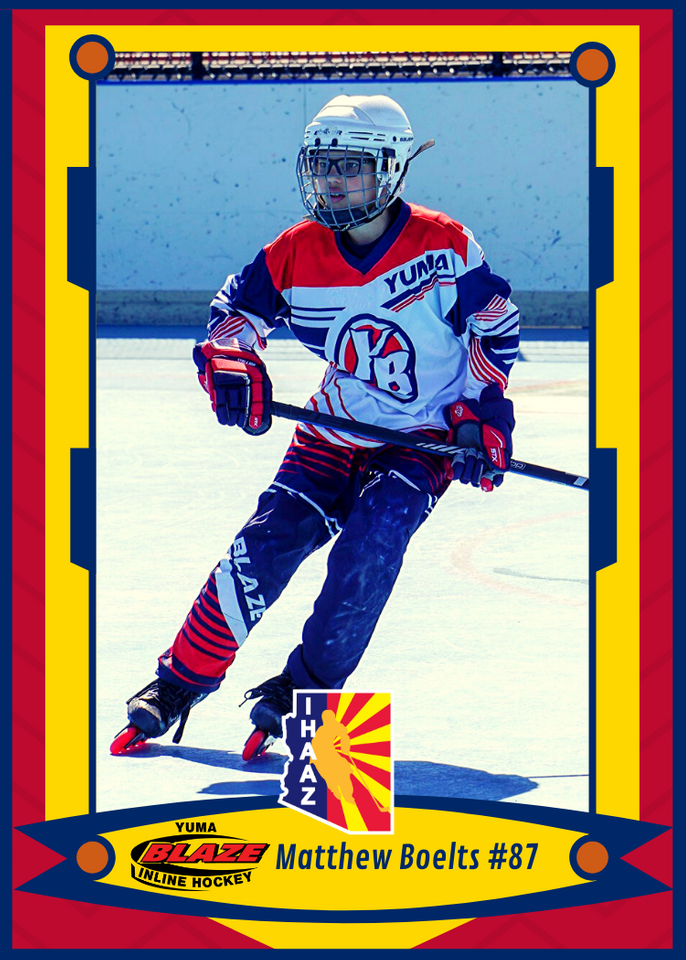 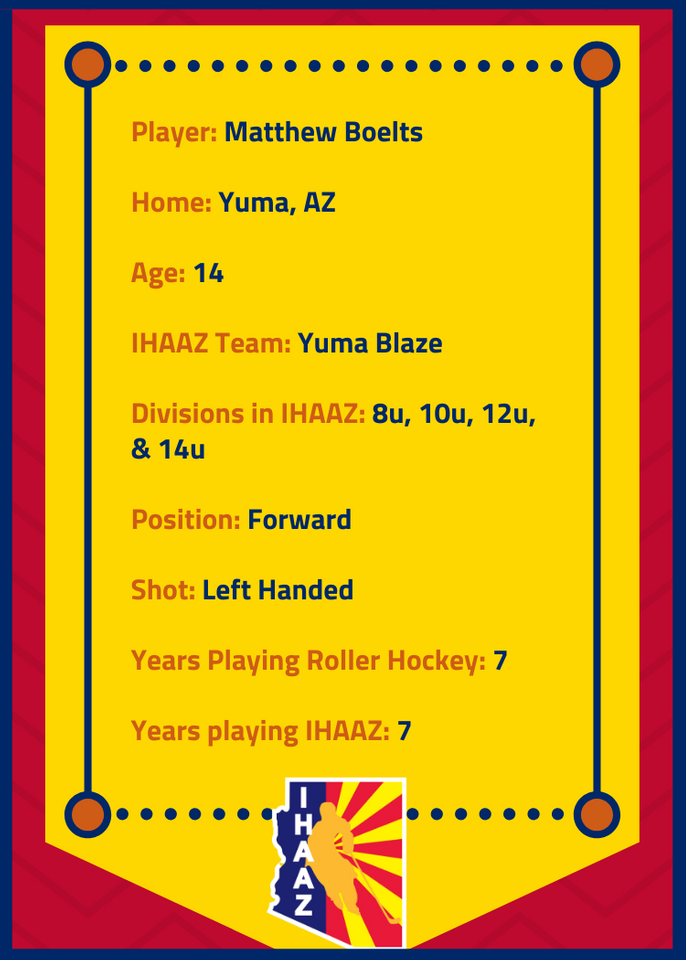 WE ASKED Matthew  A FEW ADDITIONAL QUESTIONS TO THOSE ON HIS IHAAZ CARD, HERE'S WHAT HE HAD TO SAY:

IHAAZ: What is the most memorable thing you can remember from your years of playing in IHAAZ tournaments?

Matthew: Last year, during my last year of 12u hockey, my team went 32-0 for the season. It was the first year we had won the state championship.

IHAAZ: Who is your favorite Blaze teammate to play with and why?

Matthew: I really enjoy playing with all my teammates and can’t really spotlight one player. A hockey team doesn’t win games because of one player. It takes the effort of all the players.

IHAAZ: Do you remember scoring your first IHAAZ goal? Tell us about it?

IHAAZ: You play with a bunch of goofy characters on the Blaze. What's one of the funniest things you can remember that involve you and your Blaze teammates?

Matthew: The funniest times I can remember with my team are the locker rooms before the game. We make jokes and laugh and have fun. But, the only part that matters is that everyone is happy.

IHAAZ: What's more important to you making a big defensive play or scoring the game winning goal, and why?

Matthew: To me having fun is the most important part about playing hockey. If you don’t have fun then it’s no longer a game it’s a way of living, and if you lose without having fun you will always be sad.

Matthew: I’m very proud of my ability to shoot and score. I worked for hours every morning for months until I could shoot from anywhere. But, one thing I do need to work on is my speed compared to most of the 14u league I’m slow.

IHAAZ: You grew up watching a lot of very talented players from Yuma and the Blaze program. Who have you most looked up to as a player from your organization?

Matthew: I have looked up to all of the players who are older. But, the ones I have learned lots from are Taylor and Benjamin Dicori.

IHAAZ: The Yuma Blaze is one of the most consistent programs in IHAAZ, and has been for a while now. By the time Blaze team cores reach 14U they are usually in the top of the pack, and by midget a contender for State Finals. What do you attribute the programs success to?

Matthew: Our teams play together for years. And we are taught to play as a team. We lose or win as a team. By the time we reach 14u we can understand each other better than the other teams. (This is 100% accurate....)

IHAAZ: Those who don't know you, might not be aware of what an analytical player you are. You tend to look at the game, your competition, and your teammates from a slightly different vantage point than others who just go out and play. How do you think that helps you succeed as a player?

Matthew: Due to my analytical abilities I am able to predict what my teammates and even the opposing team will do, before they do it.

IHAAZ: One of the things that we see in IHAAZ competition as teams get older is how match ups can be tough for some teams. Blaze has bested some of their opponents, only to then lose a game to a team that got bested by a team the Blaze has beaten. What teams do you think your Blaze teams match up well against versus ones that they don't, and why?

Matthew: The Yuma Blaze team that I have played with for years continues to struggle every other year with one team. That team is the Wildcats. We tend to struggle with them every other year because most of the players on their team is a year older. Makes for a tough matchup.

IHAAZ:In your opinion, what is more important for a teams success; individual skill or system? Your coaches for 14U and Midget Blaze are very system oriented and demand discipline, where as others rely on a few key players.

Matthew: In my opinion the important thing for our teams success is a system because a team will lose together and win together. We don’t lose due to one player or win because of one player.

So, we actually asked Matthew's Blaze coach, Matt DiCori the same question and this is what he said:  "My favorite thing is his passion for the game and work ethic to become better. What drives me crazy is he cannot leave a puck alone if it is on the rink during practice".

Matthew:I have gone out and practiced stick handling for 30mins each day. And I have also gone and skated around the park near the Yuma airport.

IHAAZ:What do you miss the most right now about not getting to play IHAAZ?

Matthew:a I miss the thrill of scoring a goal or winning a hockey game. I also miss having fun with my teammates.