For our next spotlight we're back in Peoria, AZ with the Knighthawk's Mason Maschner. Although only 8 years old, Mason is already a veteran in the 8U division playing his 3rd season in that age group, with another still in the barrel for next season. a self proclaimed defenseman, Mason is out to take your puck from you, and turn it the other way to go score a goal! 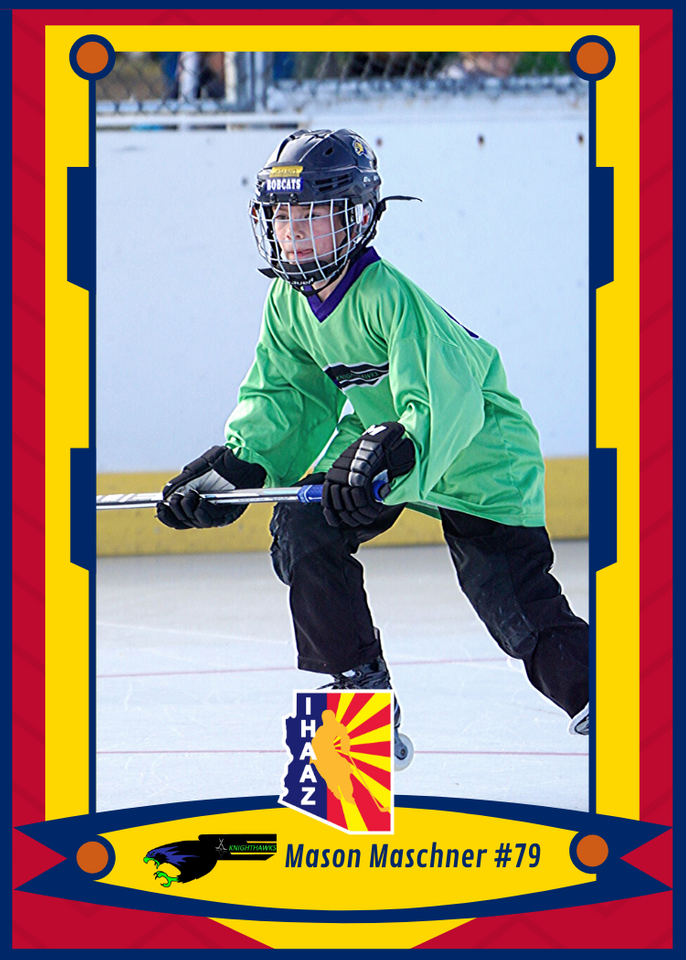 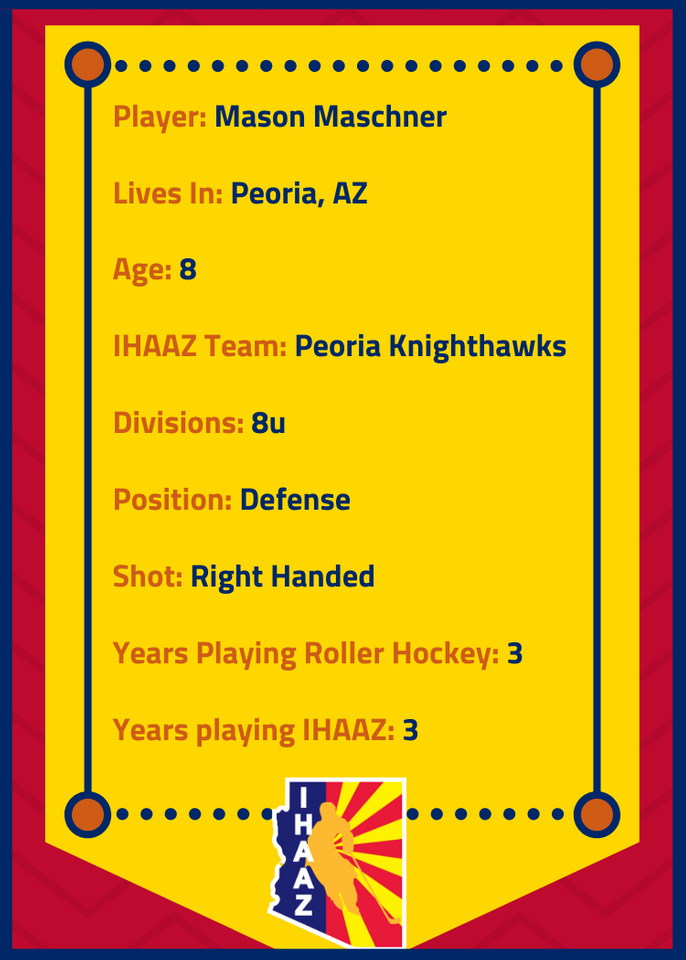 WE ASKED MAson  A FEW ADDITIONAL QUESTIONS TO THOSE ON HIS IHAAZ CARD, HERE'S WHAT HE HAD TO SAY:

IHAAZ: What is your favorite IHAAZ rink to play at?

IHAAZ: What is your favorite Knighthawks teammate to play with and why?

Mason: Austin, because he is funny and he's good at hockey.

IHAAZ: Do you remember scoring your first IHAAZ goal? Tell us about it?

Mason: Yes, I was 6, it was during the skills competition, and it went 5 hole. I was excited.

IHAAZ: A lot of funny things happen when you get a bunch of 7, 8, and 9 year olds together for hockey. Do you have any funny stories from IHAAZ you can share with people who read this?

Mason: When you are little it's hard to get out of the bench sometimes. I remember one time a bunch of us fell trying to get out.

IHAAZ: I've been told you play ice hockey too? Which did you start first?

IHAAZ: Playing both ice hockey and roller hockey, is one easier or harder for you to play and do you prefer one over the other or do you like them both the same?

Mason: I think they are both the same for me. I love them both but I like that I get to play full rink on roller. (Mite ice hockey plays cross rink which even by roller rink standards is pretty small)

IHAAZ: As an 8 year old, you're one of the "veterans" of the division. Usually someone your age is in their first or second IHAAZ season but before we had to pause the season, this was your 3rd year playing 8u, with one more still to come in 2021. Has it gotten a lot easier as you got older?

IHAAZ: What's more important to you making a big defensive play or scoring the game winning goal, and why?

Mason: Making a defensive play because I don't care who scores as long as we are playing hard and having fun.

IHAAZ: Some people might not know that your uncle is Knighthawks coach Dustin Jans. Has your uncle helped you get better as a roller hockey player?

Mason: Yes, because he always pushes me to be the best player I can be. He helps me train and helps me with my hockey skills. He also tells me what to do during my games.

IHAAZ: Who is your roller hockey idol? Is there anyone you've seen play who you model your game after?

Mason: Scoring goals and being a good teammate. I want to get better at dangling the goalie.

Mason: They would say that I'm a good hockey player. When I was younger I would always beg to be put back out on the rink, I know that drove them crazy.

So, we actually asked Mason's Knighthawks coach, Uncle Dustin Jans the same question and this is what he said:  " What I love .... he has such raw passion for the game! He just loves playing. What drives me nuts? How literal he is;  if you tell him to stay in front of the net he literally will stand in front of net and not move!!"

Mason: I've been training with Dustin and Landon. Skating in my driveway and riding my bike.

Mason: My teammates, scoring goals, winning games, and just being able to play hockey. I miss it all.