Our latest spotlight is back between the pipes with Prescott Storm Lightning goalie Maddox Marshall. Through a combination of a strong mental game and a sound technical style, Maddox has proven himself as one of the top goalies in his age group, and at times the next age group up. 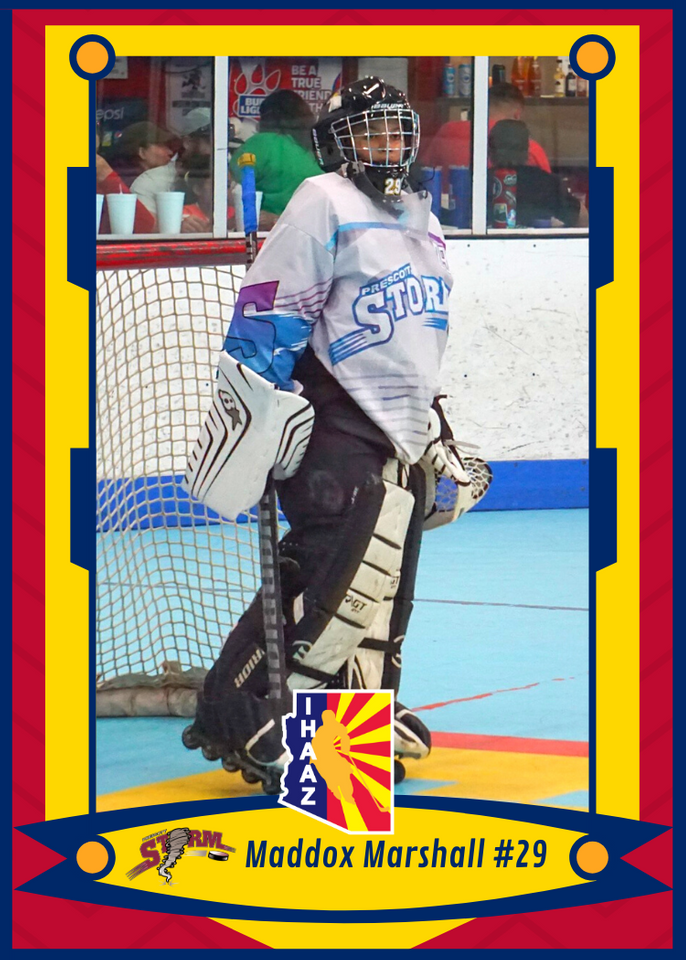 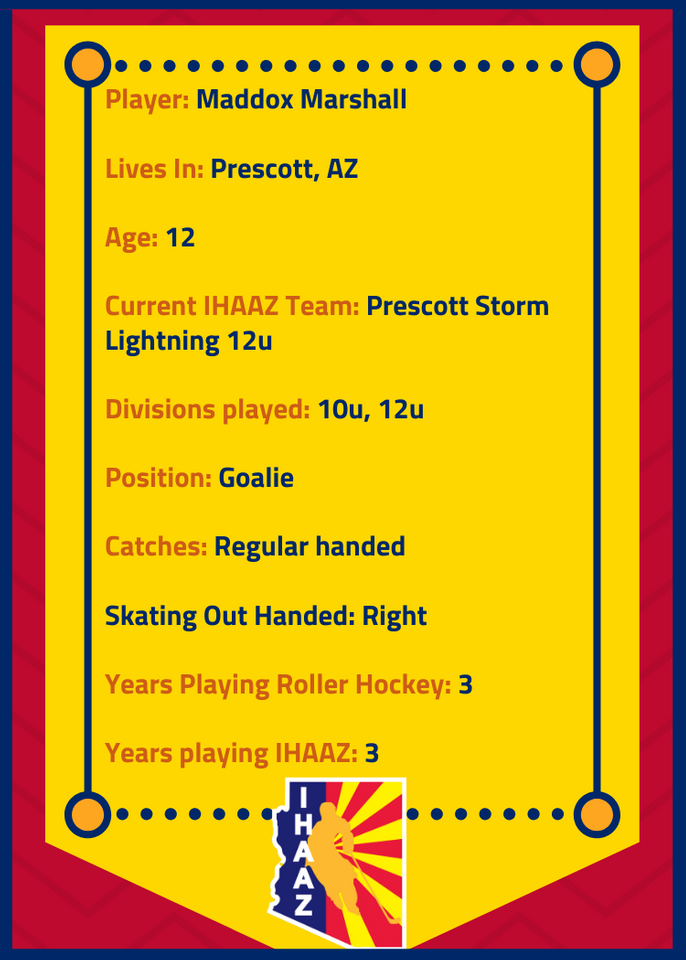 WE ASKED MADDOX  A FEW ADDITIONAL QUESTIONS TO THOSE ON HIS IHAAZ CARD, HERE'S WHAT HE HAD TO SAY:

IHAAZ: We play at a lot of different rinks and for skaters the difference is mostly just the floor, but as a goalie there's a lot more that goes into which rink you like the best. There's things like where the sun is during the day or the lights (or lack of them) at night. Is it harder or easier for you to play at the outdoor rinks versus the indoor ones and why?

Maddox: I like Barney’s because they always have lights and its never too hot in there. It is also sport court which helps me move better.

Maddox: Eli Simpson, because he is always cheering you on and is always positive. He is a really good leader of our team, and also he’s pretty good.

Maddox: Some of the parent’s call me Stonewall Dragon.

Maddox: Yes it was against Yuma (Blaze) at the Prescott rink . It was also on my birthday!

IHAAZ: One of the questions we ask goalies is if they've ever skate out in an IHAAZ game. You replied that you had. How was it?

Maddox: Great, I really enjoyed playing out. It was a lot of fun!

IHAAZ: A lot of funny things happen when you get a bunch of hockey playing kids together. Do you have any funny stories from IHAAZ you can share with people who read this?

Maddox: When one of my favorite teammates scored on me in the championship game but we still ended up wining.

IHAAZ:I've been told you play ice hockey too? Which did you start first?

Maddox: Yes I do play ice hockey, but I started roller first.

IHAAZ: Having played both games at a competitive level, which is harder for you and what are the biggest adjustments you find you need to make going back and forth?

Maddox: Ice is easier because its less work to move from side to side. But harder because the puck comes flying towards me a lot faster. While with roller, I have to move more and use more body parts to stop the puck. Sometimes I find myself in strange and awkward positions.
IHAAZ: Because of what I'm going to call your exceptional skills as a goalie, you've had the opportunity to play in multiple IHAAZ age groups at a time, and against some very skilled players a couple years older than you. Sometimes the result of playing up as a team is you get whomped pretty badly by the top teams in that older age group. Do you think those tough games have helped you over the years?

Maddox: Yes, they have helped me because I face harder shots and learn to get better positioning.

IHAAZ: In playing up, you've sometimes had to play against kids you're on the same team with in another age group. Has that been hard to be their teammate one moment, and the goalie trying to stop them from scoring later in that same weekend?

Maddox: It’s 50/50 because I know some of their weaknesses but sometimes it can be hard because they know some of mine.

IHAAZ: Playing up is hard for players but I'd guess a LOT harder for goalies. From a mental standpoint, how do you keep your focus over long weekends with some very tough games? Do you have any secrets to how you are able to bounce back after a tough loss and come out ready to play in the next game?

Maddox: After a tough game. I have to remind myself that I’m playing against older and better players. And then forget about that game and get ready for the next one.

IHAAZ: Who's the hardest shooter to stop for your in IHAAZ? Is there anyone that's just got your number? Someone that when they're coming towards you with the puck you think "oh man not him/her again"?

Maddox: The thing I’m most proud of is wining the goalie award last year. One of the things I need to work on is positioning.

Maddox: Because I’m easy to coach and laid back. However it also drives them crazy that I am so laid back.

We actually asked Maddox's Prescott Storm Lightning coach Gregg Olson, and he is what he said: "What I love about his play. Here is a kid that stays so calm before a game, but goes out and plays with his heart. There is a lion just resting inside him that becomes uncaged when he gets in the net. What drives me nuts is how calm he stays before a game. I get more wound up more than a squirrel on Methamphetamine beforehand, but he stays  cool as an ice cube. I actually make it a point to talk with him pregame, because he helps calm me down."

Maddox: I’ve been doing a lot of Mountain biking to keep in shape.

Maddox: I miss having fun and playing with friends.