today our spotlight falls on a goalie named Luke Yubeta. Normally here we'd also say who Luke plays for but that is not such an easy statement to make. This season Luke plays for the Knighthawks but over his prolific IHAAZ participation Luke has been what you might refer to as a "journeyman goalie" but his moves were always his own and any team would be happy to have him. Whether he was your goalie or the one you had to shoot on to win, there's two things you can count on: he's going to be hard to score on, and he's probably talking to someone. 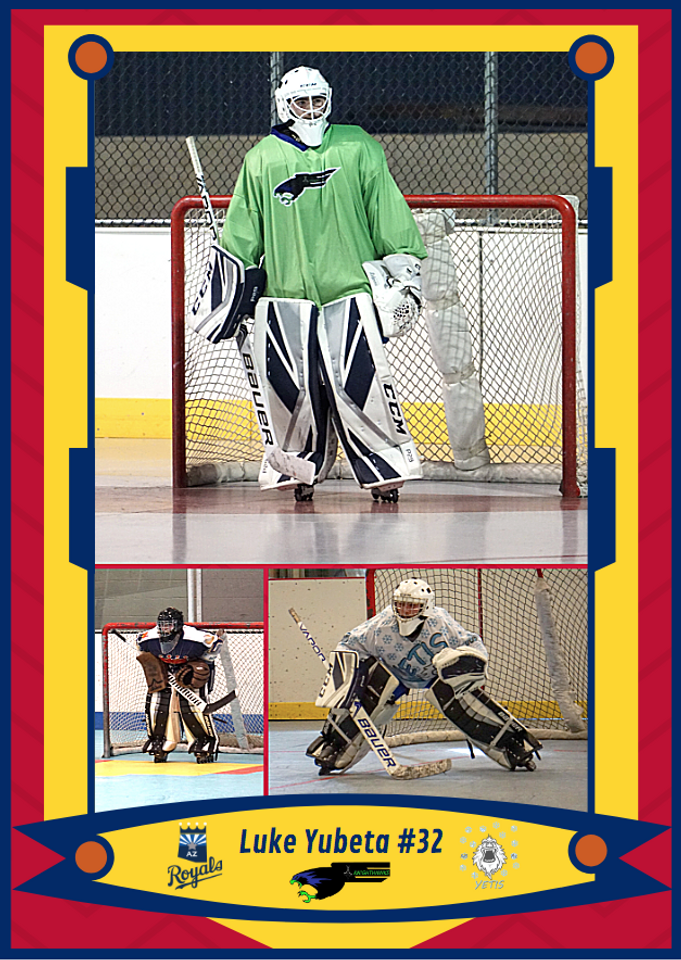 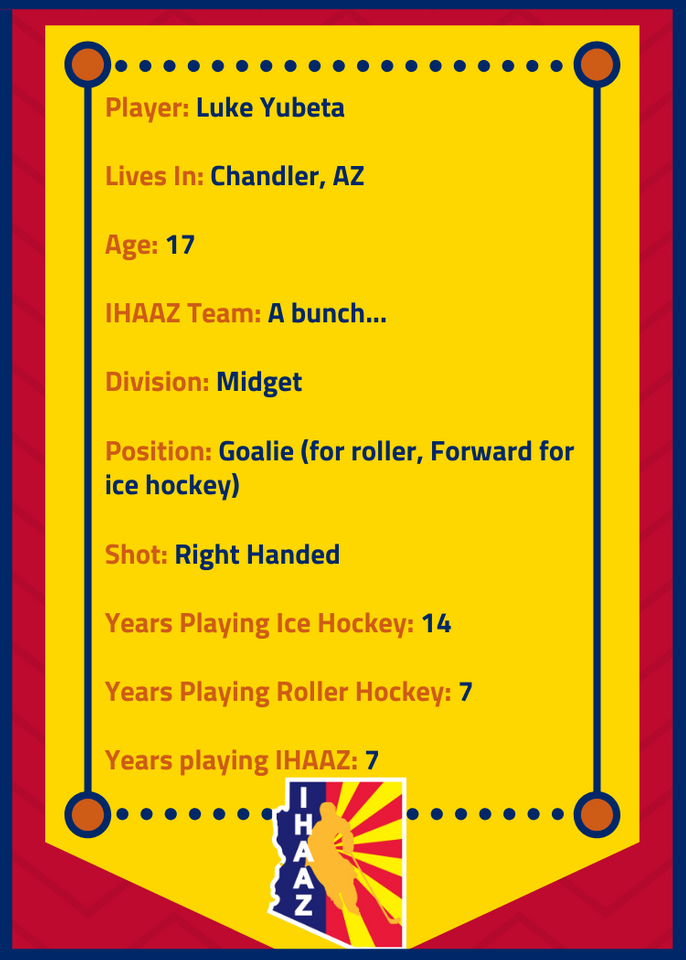 WE ASKED Luke  A FEW ADDITIONAL QUESTIONS TO THOSE ON HIS IHAAZ CARD, HERE'S WHAT HE HAD TO SAY:

Luke - Winning the Midget championship with the Royals. We played Yuma in the state championship and it was such a well fought, back and forth game.

IHAAZ - A lot goofy stuff happens on and off the rink, what's your funniest IHAAZ memory.

Luke - This year in Tucson, I had a shot come off the face-off that was going over the net. I went to catch and it and it went off my glove and into the net.

IHAAZ - You were part of the first youth ice hockey group to jump into IHAAZ back when you were 10 or 11 I believe, with your AHU Knights ice teammates. Since then IHAAZ has seen a huge influx of other ice players doing the same. What about IHAAZ and roller hockey in general got you hooked?

Luke - Roller just has a different atmosphere that I love so much. There’s not as much politics involved and everyone is there just to have a great time while still playing at a competitive level. I believe that atmosphere is infectious and that’s why we’ve seen so many more kids come over from ice to play.

IHAAZ - Since that first year you've played with a bunch of different teams and groups, including a couple Royals rosters, the Yeti, and now you're wearing a Knighthawks jersey but playing with a couple of the kids from your very first IHAAZ team. What's it been like playing with and against the same players over the years?

Luke - I think playing with and against so many different people throughout the years provides a very unique aspect to the game. You form bonds with people from different cities, states, and even countries. The bond sticks throughout the years and you gain an enormous amount of love and respect for so many people that you couldn’t even begin to imagine.

IHAAZ - You are a very skilled roller hockey goalie but on ice hockey you skate out? That's usually the other way around (goalie on ice skates out on roller). How did you end up being a roller goalie and why do you keep doing it?

Luke - Originally on my first IHAAZ team, I was going to be a skater. We had one practice before the season where I skated out and we had our whole team together. Then, about a week before the Anthem tournament, our goalie quit and we needed a new goalie. With so little time to find a goalie, I volunteered to play since I had a little bit of experience playing in house leagues and because I actually had pads. From there, playing goalie just stuck and I continued to do it and fell in love with it every time I stepped on the rink.

IHAAZ - You have skated out a few times over the years in IHAAZ; did you score any goals or get any points skating out?

Luke - Actually yes. Last year, I skated out for one game with the Yetis at state championships and scored 2 goals in that game.

Luke - Carsen Welch. We’ve been playing ice together for the past 9 years and have been playing roller together since the very beginning. We’ve shared our entire childhood playing hockey together and created many lasting memories.

IHAAZ - Who would you say your IHAAZ rival team is and why?

Luke - Personally, playing for so many teams it’s hard to choose a rival. I’d have to say Yuma because I never played for them and they come out hard every game and always put a good showing on the rink.

IHAAZ - Do your teammates have a nickname for you? If so what is it?

Luke - Over the years, I was given the nickname “Stats” because I like to analyze all the different scenarios and scores that could happen and many parents and players would come to me to find out where our team stood.

IHAAZ - If we asked your coaches to give us their favorite thing about you and the thing that drives them the most crazy about you, what do you think they'd tell us?

Luke - I think they’re favorite thing is that I always try to keep a positive attitude. What drives them crazy is probably that I never stop talking.

So, usually this is where we'd ask Luke's coach this same question however that's about 4-5 different coaches so as someone who's coached Luke in IHAAZ as well as his summer Outcasts teams, I'm going to go ahead and say on behalf of all of the coaches he's had, that he basically nailed it with his answer.

Luke - I’ve just been trying to stay as active as possible. As mentioned before, I am a skater for ice so if I am doing anything hockey related it’s usually shooting in my backyard. Other than that, I’ve spent a good amount of time doing my school work or watching movies I’ve never seen to pass the time. Before everything got shutdown however, I did get a skate in with some of the local adult and pro guys looking to get some rink time.

Luke - Getting to play with my teammates. For most of them, this is their last year of youth hockey and I look forward to getting back on the rink and playing with them for whatever time we have left together.