Our next spotlight player is the Yuma Blaze's own Izzy Clark. Along with the Blaze, Izzy was one of the girls selected to compete on the USA Womens JR team for the World Roller Games in Spain this past summer. Izzy brings the mood up at every IHAAZ festival she's at, and we couldn't think of anyone more deserving of some spotlight than Izzy! 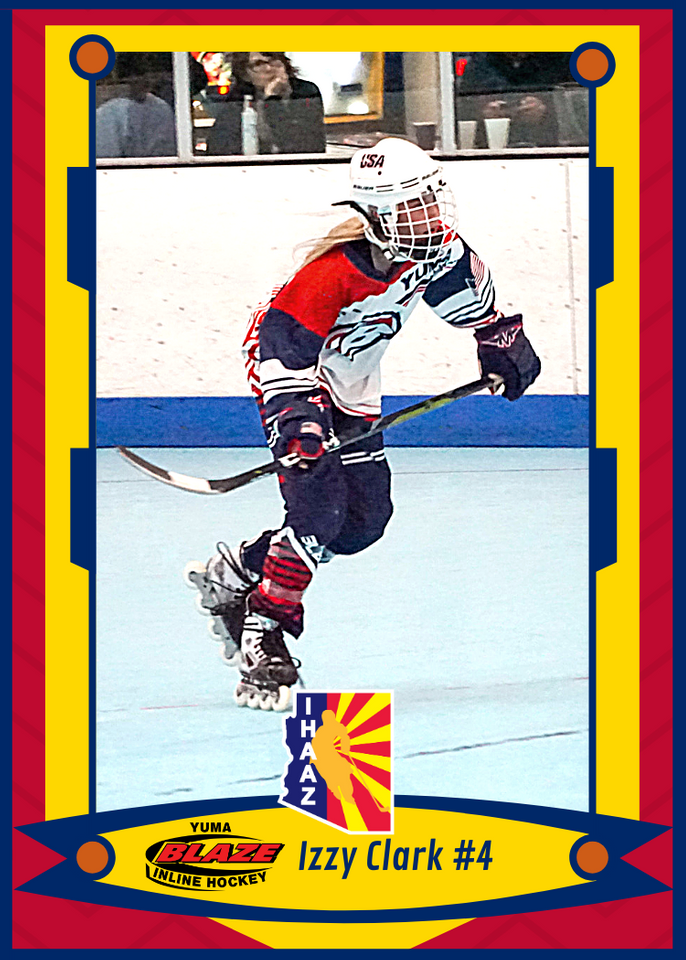 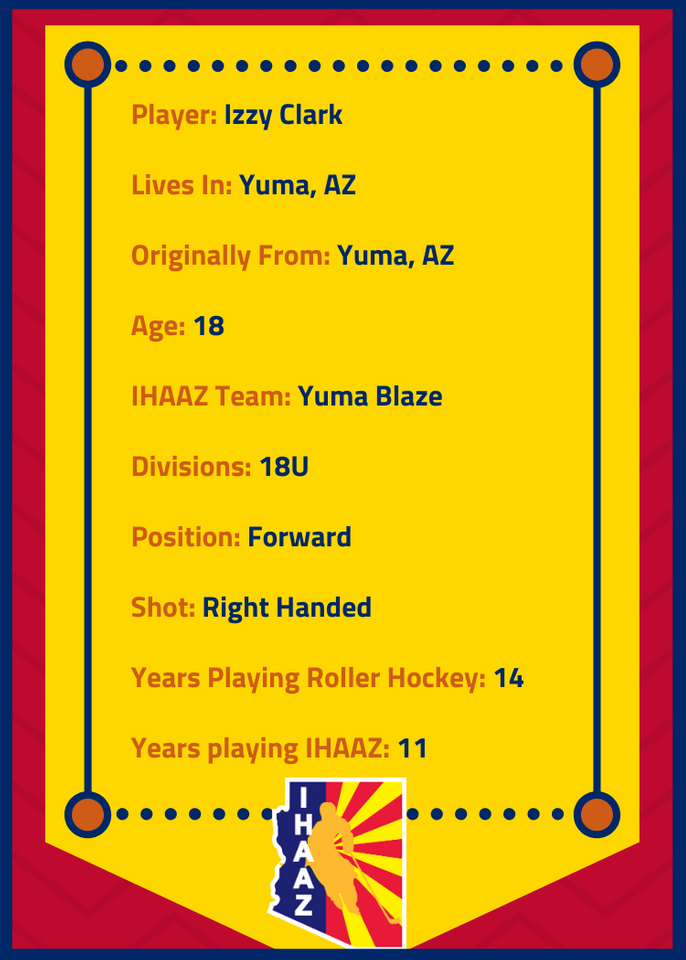 We asked Izzy a few additional questions to those on her IHAAZ card, here's what She had to say:

Izzy - My favorite rink is Yuma.

Izzy - My favorite memory is the look and excitement on Coach Johnson’s face whenever we would win a game against a really hard team. It was the best feeling knowing you pushed your hardest and made your Coach so proud.

Izzy - My funniest IHAAZ memory was getting stuck in a trash can in full gear with Brendan G. and Alexis F. I don't know why we all went in there, but it was honestly one of the funniest moments ever. It took us awhile to get out but luckily, we weren't late to our next game.

IHAAZ - Who is your favorite Blaze teammate and why?

Izzy - John B. and Justin V. are my favorite teammates to play with because they are always so goofy. During practice/in games we’d always joke around which makes playing hockey so much fun. There’s never a boring moment with those two.

Izzy - Everyone calls me Izzy, but the homies call me”Iz”.

IHAAZ - Who do you least look forward to playing against at each IHAAZ festival?

Izzy -I enjoy playing against everyone. Hockey is hockey no matter who you play against. But, i don't look forward to playing teams that play dirty. It takes all the fun out of the game when you purposely try to hurt someone.

IHAAZ - What team do you enjoy playing against in IHAAZ the most and why?

Izzy - I look forward to playing against teams that have players I know. For example, Yeti since they have Jake and Austin. It’s fun playing against people you know because it makes it more personal and intense.

Izzy - I think the coaches would say my personality. I’m always laughing or making people laugh at practice. They'd also probably say there isn't a dull moment when I am around.

So we actually asked Izzy's Blaze coach, Jeff Johnson the same question and this is what he said: Well if I’m honest, my favorite thing about Izzy has to be her outgoing and positive personality. She almost always has something good or positive to say.  The thing that is most frustrating about her is that she doesn’t keep her stick down!

Izzy - Coach Johnson has always been the most influential person in my hockey career. He taught me when I was little how to play and never gave up on me. I wouldn't be where I am today if I didn't have Coach J. next to me through it all.

IHAAZ - What does the future have in store for you and your hockey playing?

Izzy - For my future, I plan to continue playing for Team USA and playing in various NARCh tournaments. I love playing hockey and I'm blessed that I am able to participate in International tournaments with my friends. It’s a great experience to travel all over the world with them and see different cultures. Even though my high school career is ending, it opens so many more doors for me in the hockey world.

IHAAZ - You’ve been playing with and against the boys your whole time with the Blaze (and I might add doing it well). What advice would you give to the younger girls playing IHAAZ today, about how to continue to play in “open” divisions as the boys get bigger and sometimes stronger than their female counterparts?

Izzy - I’d tell those girls to never give up. It will be hard sometimes, but that doesn’t mean you can’t succeed. Follow wherever your dreams take you and never stop when people don’t believe in you. Push through those boundaries and prove to those people and the world that you can do anything if you just put your mind to it.

Izzy - I've been using my time to sharpen my stick handling skills. I'll listen to my school audio books while I practice so I can study while I play. It’s really nice to have extra time to help me strengthen my skills since school is out.

Izzy - I miss seeing everyone. I mostly miss my team but I do miss seeing all the friends I've made over the years that are on other teams. We keep up over social media but it’s not the same as being there in person.