Today our IHAAZ Spotlight faces north and shines on Northern Arizona Yeti and their Defenseman Grady Sherwood. Three seasons ago the Sherwood’s formed the Yeti, making it the first Midget team from that part of the state in a while. The Sherwood’s didn’t just make a team for their sons though, they gave them the reigns and the responsibility of running their team. From coordinating practices, to money collection, and even the recruiting and roster itself, the Sherwood brothers were the ones doing the work.  With his brother Griffin graduated and off to the University of Arizona this past fall, Grady has been left the task of carrying the Yeti banner into battle... a task he's really hoping he can finish out. 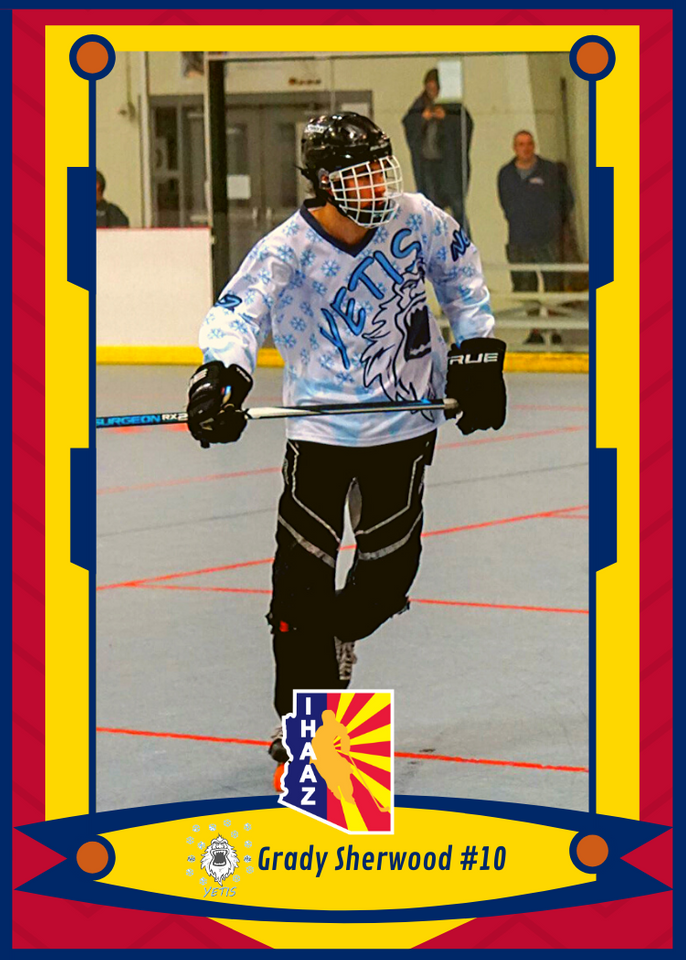 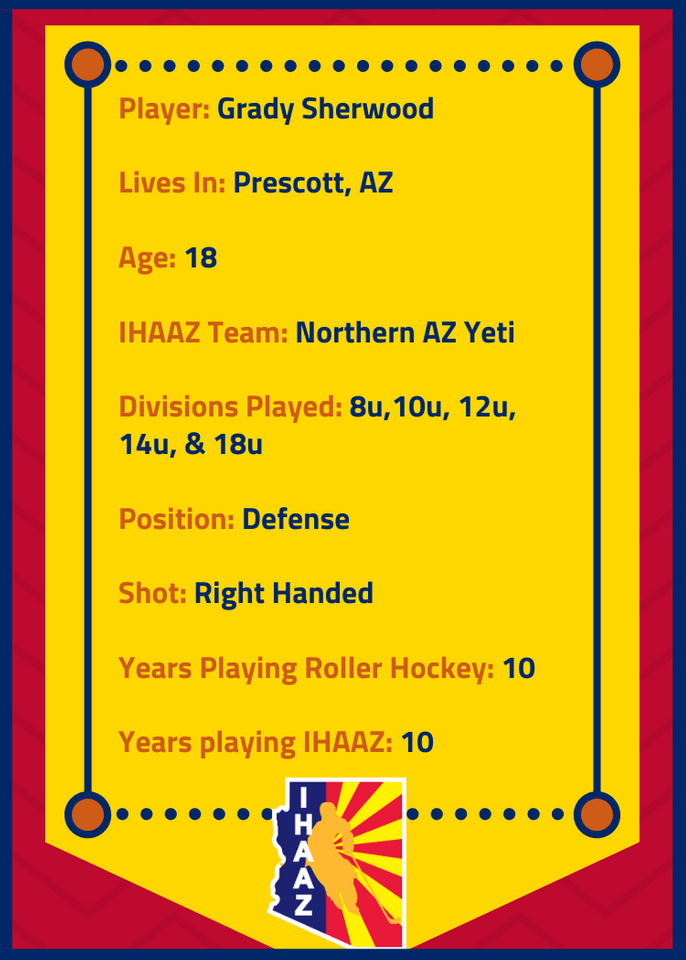 WE ASKED Grady  A FEW ADDITIONAL QUESTIONS TO THOSE ON HIS IHAAZ CARD, HERE'S WHAT HE HAD TO SAY:

Grady - Winning the 8U state championship my first year of roller, and more recently, finishing the regular season in 2nd place with the Yetis.

IHAAZ -You’ve played with some real characters over the years on the Yeti, I’m sure there’s some good stories there, what's your funniest IHAAZ memories you can share with everyone?

Grady - Getting kicked out of a hotel in 12U for playing hockey in the hallway.

IHAAZ - Over the years you've played IHAAZ, who has been your favorite IHAAZ teammate to have played with and why?

Grady - My brother, we've always had the best chemistry on the rink and always have the most fun off the rink.

Grady - Also my brother for always pushing me to be on his level, my Prescott youth coaches for teaching me the fundamentals, and Nick Boyarsky for taking my game to the next level with the Outcast program. (Unsolicited but thank you!)

IHAAZ - I've always been a fan of the Yeti jerseys and the logo, did you guys come up with that concept on your own or did the jersey designers bring an idea to life for you guys?

Grady - We took the inspiration for the actual yeti from a French roller hockey team and then my older brother was able to use that as the center piece and design the rest of the jersey with some help from my mom.

IHAAZ - Right now there are 5-6 "independent teams" in IHAAZ, meaning teams that are not part of one of the member programs that make up the IHAAZ board. The Yeti are one of those teams, and for a while were really the only independent team in the series. Can you speak to how the Yeti came about and why?

Grady - The yetis started 3 years ago after my brother and I needed a high school team to play for. The Prescott storm team didn't have enough players to compete and we figured that if we were going to have to be recruiting players and organizing the team ourselves, we might as well start our own team. We built it from the ground up and are very proud of what it has become today.

IHAAZ – One thing that’s always stuck out to me about you and your brother is your hockey situation is sort of the mirrored opposite of what a lot of IHAAZ players do; you went from Roller Hockey to Ice Hockey (for High School Hockey) and started playing ice after having played roller. What was that like for you as a player?

Grady - Switching to ice after playing roller for so long was a difficult transition. Learning how to skate and stop on ice was probably the hardest part, and even to this day I'm not as confident on ice skates as I am on roller skates."

IHAAZ -Without younger divisions to feed into the Yeti teams, how have you and your brother kept growing the team every year? Where are your players coming from?

IHAAZ - So with this team having been formed basically by (and a little bit for) the Sherwood family, with you graduating this year and moving on, will the Yeti end its era or is there a desire to keep the club going?

Grady - We are looking to continue the Yetis team for at least 1 more year. With our goalie and a lot of the players being High School Juniors, we are hoping the Yetis team is able to compete next year. As for after that, I have no idea. If some younger player joins the team next year and wants to, in a way, take it over then the team may continue. Other than that, I think it could be the end of the road for the Yetis.

IHAAZ - It's looking like the possibility of playing again before summer is in question, but let's say there's a State Finals tournament to be played (fingers crossed), how do you like the Yeti's chances? You're sitting in the middle of the pack after 2 events, behind the Blaze and then the Knighthawks. In a tournament situation you'd just need to beat those two teams once, maybe twice to be able to see one of them in the final. What do you think your squad needs to do to get past those two teams?

Grady - I believe the Yetis have the talent to beat any team in the division, but we have not yet developed all the teamwork that we need to succeed. We have players from all over the state making it hard to practice with the whole. If we improve our communication I think there's a good chance we will succeed at State Finals.

IHAAZ - If we asked your coaches what their favorite thing about you is and what drives them the craziest about you, what would they tell us?

Grady - Their favorite thing about me would my ability to bring the team together and be friends with everyone there. I also drive them crazy sometimes with how much I mess around off the rink and in the locker rooms.

So, we actually asked had to ask Grady’s Dad  Glen this question since he is the man in charge behind their bench . This is what he said: “My favorite thing about Grady is the intensity he brings to the game while keeping his emotions in check. What bothers me a little is that he doesn't talk enough on the rink."

Grady - I've been going out to the Prescott rink at least once a week to work on my skating and playing some 1 on 1 hockey with my brother.

Grady - This year was my senior season, so I was really looking forward to training as a team and hopefully progressing to a state championship.