For OUR next SPOTLIGHT we turn to Peoria knighthawks player Dylan Mickelson. Dylan was new to IHAAZ as of last season and for that matter new to hockey not long before that but you'd never know it watching him fly down the rink, make patient skill plays, and score goals. Dylan missed the 2nd festival in tucson but we think he probably deserves a pass since we know he'd much rather have been there over where he was. 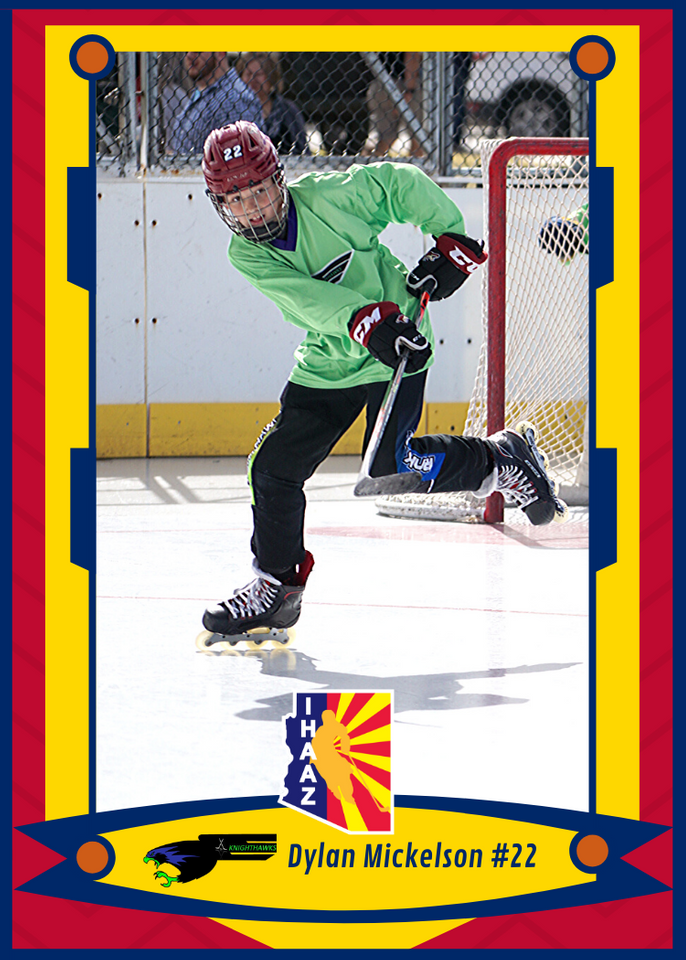 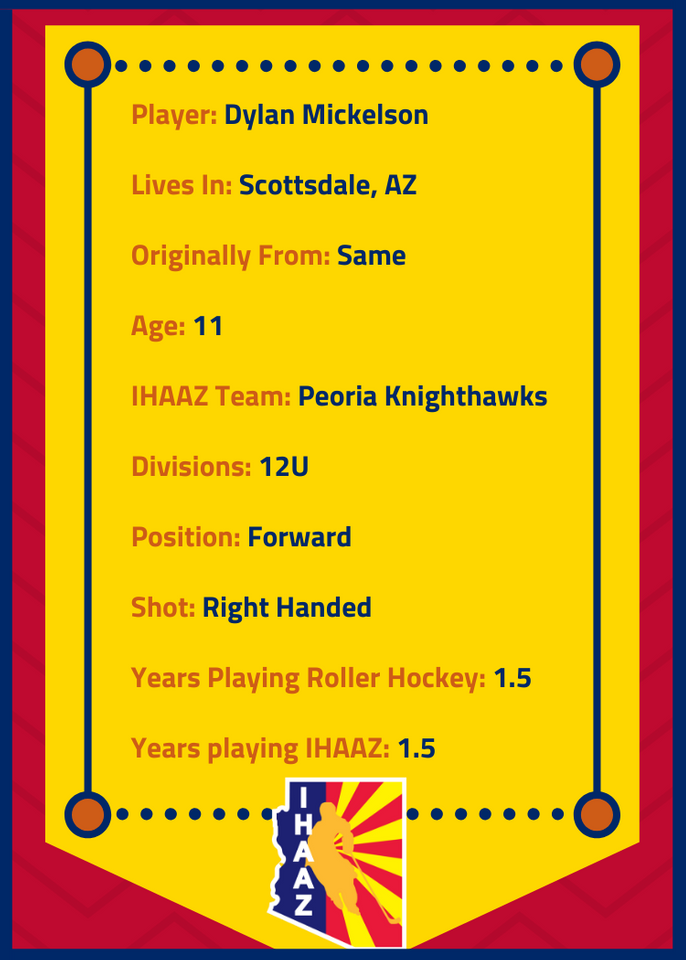 WE ASKED Dylan A FEW ADDITIONAL QUESTIONS TO THOSE ON HIS IHAAZ CARD, HERE'S WHAT HE HAD TO SAY:

Dylan - Making the all-star team, coming in first in 10u and third in 12u fastest skater competitions, and leading the 10u league in overall points in my first season.

IHAAZ - A lot goofy stuff happens on and off the rink, what's your funniest IHAAZ memory.

Dylan - There were a couple times last season when I had a wheel fall off during a game. I didn't think it was funny at the time because I had to come out and get it fixed but looking back I have to laugh because my dad would always be tightening my skates yet it would still happen. (Dad, invest in some medium blue locktite and throw a few drops on those axle screws,  it'll never happen again).

IHAAZ - Who is your favorite Favorite IHAAZ teammate and why?

Dylan - Landon Jans - because he is a great player and fun to play with. He has crazy handles and can dangle with anyone. He has no problem scoring but he also has great vision. When we play together we can feel what the other is going to do before it happens.

IHAAZ - Who would you say your IHAAZ rival team is and why?

Dylan - Tucson Jr Wildcats because they are a really good team, with good players, that is tough to beat. Our games are always very close against them.

Dylan - Probably my dad, because he is always taking me to practice and games no matter what he has going on. He is always playing with me at home, working on my skills, he got roller blades so he could skate with me, and even got goalie pads for him to play goalie against me.

Dylan - They would probably say my speed and how I never give up on a play. The thing that drives them crazy would be when I'm out of gas late in the game playing and take a stupid penalty because I'm being lazy.

So, we actually asked Dylan's Knighthawks coach, Dustin Jans the same question and this is what he said: “Favorite thing: he's always positive not matter what! We could be down by 10 and Dylan always thinks we have a chance to win! For what drives me nuts? I cannot stand when he does not back check.... arguably the fastest skater in 12u and you don’t back check! C mon bro!"

IHAAZ - So you have not been playing hockey (ice or roller) for that long in comparison to a lot of your competition, yet you're very effective out on the rink. How did you pick up the sport(s) so quick?

Dylan - I played a lot of other sports and was always the fastest and one of the more athletic kids on the team. So I pick up things quickly. I always loved the fast pace of hockey and when I was younger I watched it all the time. Games on TV or highlights and even on youtube. This really helped me understand the ins and outs of the game.

IHAAZ - Before everything like hockey and tournaments were put on hold, we'd had 2 IHAAZ festivals. You were in Yuma for that one, but missed Tucson. Where were you during the Tucson tournament?

Dylan - I was on a 7 day cruise with my family. We went to Puerto Vallarta, Mazatlán, and Cabo San Lucas. The cruise ship was huge, it had two water slides, a miniature golf course, and even had a go kart race track. When we went to Puerto Vallarta we took a burro ride to the top of a mountain in the rainforest and then took ziplines through the forest, sometimes going into a river and rappelled down a waterfall. It was a lot of fun but a little stressful at the end.

IHAAZ - That must have been a bit scary towards the end for sure. What was going through your head while you were stuck there on that ship and everyone else was playing in Tucson?

Dylan - We almost didn't go because of the Coronavirus and it was stressful hearing from my parents and friends back home what was going on everywhere while we were at sea. We really didn't know if we would be stuck on the ship for 2 weeks like some of the other cruises that were in the news. When we got back to the port in Los Angeles it took so long because they were being extra careful. We thought it was going to happen but luckily we ended up getting off. I was upset that I missed the Tucson tourney but just glad to be heading back home. We followed the games on the ihaaz site while driving home so thanks for the live scoring! (When I asked Dustin Jans, Dylan's coach where Dylan was in Tucson he told me they were stuck on a cruise-ship and couldn't get back. Dylan and his family were in our thoughts all weekend. Dustin told us they were following along so we made extra sure to get all of their games scores up right away for him! We're glad you and your family made it back safe and sound).

Dylan - I have been shooting on my net, doing stick handling drills, and working on my cardio so once we are back I will be ready to go again!

Dylan - Everything! But mostly playing with my teammates.