THE IHAAZ SPOTLIGHT WILL BE SHINING A BIT WIDER OVER THE NEXT FEW POSTS SO IT CAN COVER SOME OF OUR IHAAZ SIBLINGS. FIRST UP ARE THE BLONDEL BROTHERS FROM TUCSON JR. WILDCATS. AIDEN (12) IS CONCERNED ABOUT SCORING THE GOALS, HIS BROTHER CONNOR OTHER WOULD PREFER TO NOT LET ANY GOALS PAST HIM. THE DYNAMIC OF A BROTHER DUO OF SHOOTER AND GOALIE PROBABLY KEEPS THEIR RIVALRY INTERESTING. By the time you read this, Aiden's spotlight will have been posted. Let's see how Connor relied to the same string of questions... 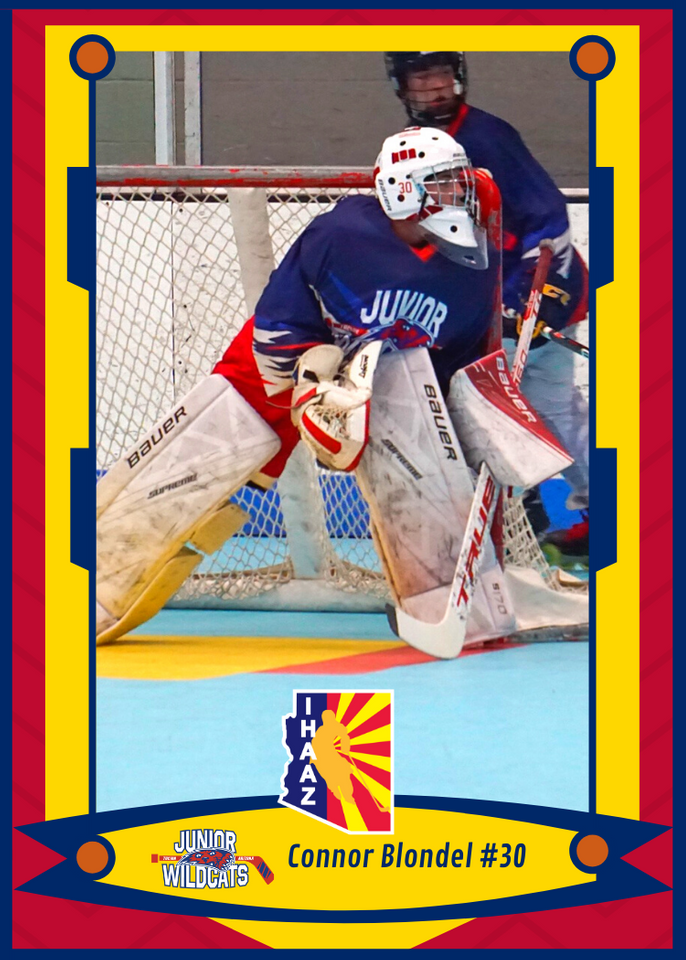 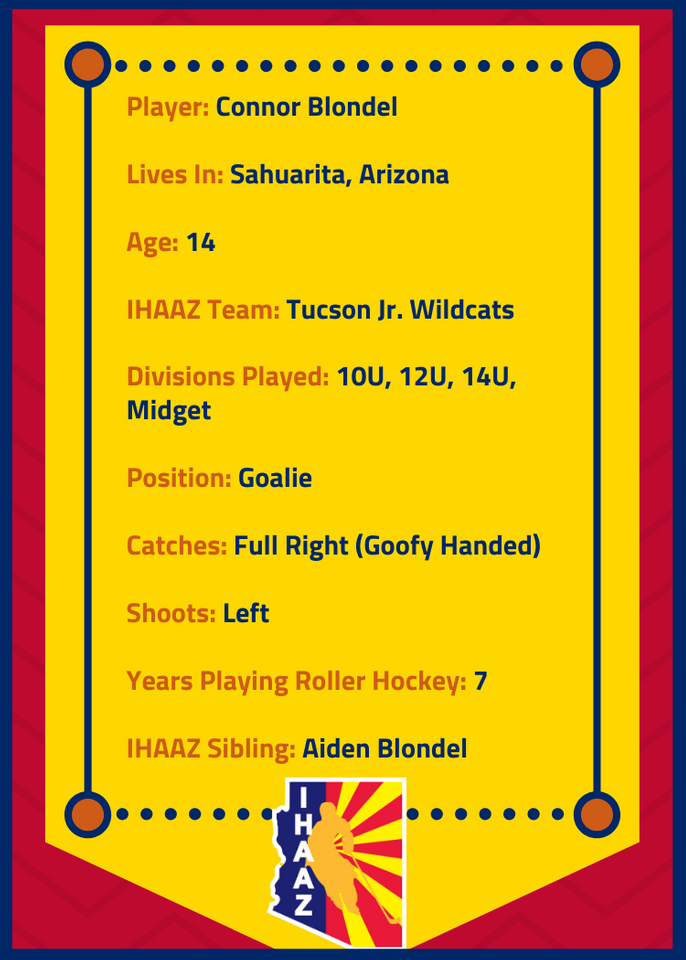 WE ASKED Connor  A FEW ADDITIONAL QUESTIONS TO THOSE ON HIS IHAAZ CARD, ABOUT HIMSELF AND HIS BROTHER HERE'S WHAT HE HAD TO SAY:

Connor:  Tucson Indoor Sports, Its my favorite rink because I've played here my whole life. It has a restaurant inside which none of the other rinks have. Its always a good time when i'm there, if its playing in a tournament, playing in the adult league or the youth league. There's never a dull time there.

Connor: That's a hard question to answer because I enjoy playing with all of my teammates.

IHAAZ: You've been playing for 7 years. What got your started playing roller hockey?

Aiden: My little brother was playing and his team needed a goalie, my dad and the youth director asked if I wanted to fill in. I said yes and I've loved it ever since.

Connor: Yes, my first shutout was my second year of 12u in the Tucson tournament against the Prescott Storm.

IHAAZ: We have been asking all the goalies we do spotlights for; have you ever skated out in an IHAAZ game and if so, how did it go?

Connor: It went well i had a lot of fun when doing it.

IHAAZ: What's your greatest IHAAZ accomplishment either as an individual or along with your team? Tell us why you feel this way.

IHAAZ: A lot goofy stuff happens on and off the rink, what's your funniest IHAAZ related story?

Aiden: When one of my coaches made up our chant. We all had a good time with that all year.

Connor: I didn't play my second year of 10u because I thought I didn't want to play.  Half way through I was bummed I didn't play, then when I got back I was the back up goalie and I was really upset. I worked and got better and made the starting position and won a state championship.

IHAAZ: This is the siblings Spotlight edition so we're going to be asking you some sibling related questions so we'll just start out with the one that's sure to provide some fun: Who's the better hockey player, you or your brother?

Connor: Me...
To remind the reader, this was Aiden's answers to the same question: "The best player out of me and Connor is me by a long shot. Its not even close."

IHAAZ: We have to assume with all the "stay at home" that's had to go on, a one on one game has had to have happened... if so who won? (and remember we're going to ask them the same question). If it didn't happen recently has it ever? Same question to that, who won?

Connor: My brother won, he cheated though.

To remind the reader this was Aidens answer to the same question: "A one on one game has happened and I won.  I scored a lot more than he blocked."

IHAAZ: Have you and your bother played on the same team before in IHAAZ or otherwise? If so, how did it go?
Connor: Yes this season we are playing 14u together, it has been a good year so far.

Connor: I think he would say I can make a save anywhere the puck is. The thing he would criticize is my save percentage.

Here's what Connor actually answered to these two questions: "I like how much better Connor has gotten as a goalie!  Connor needs to improve on his blocker side, his glove is pretty good.

IHAAZ: Do you watch your brothers IHAAZ games when they play? If so, do you do it to cheer them on to to later criticize their play?

Connor: We have been working out in the garage about 4-5 times a week we occupy ourselves by playing video games and shooting on our net

Connor: I miss not playing hockey and playing with my teammates and having fun.