NEXT UP IN OUR SIBLINGS SPOTLIGHT is Benji Dicori from the Yuma Blaze. Like many sibling duos, there are defined differences in styles of play and the Dicori brothers are no different. If trevor's style is technical and reserved, Benji's could be described as a slightly graceful version of a bull running through a china shop. A favorite of teammates and the players he competes against, that big smile and pink helmet always make for an exciting game. 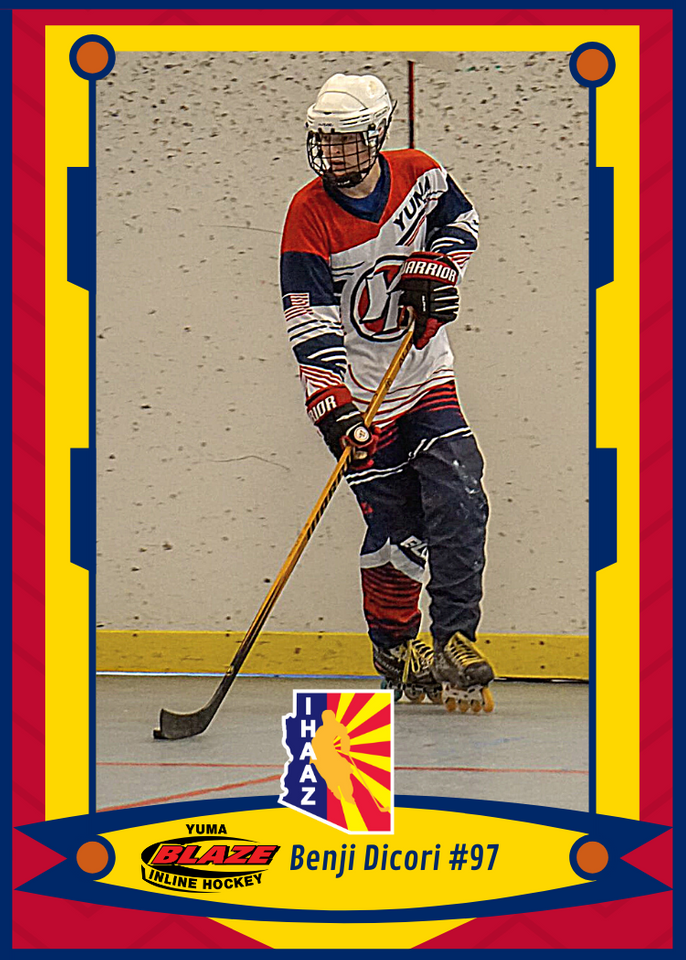 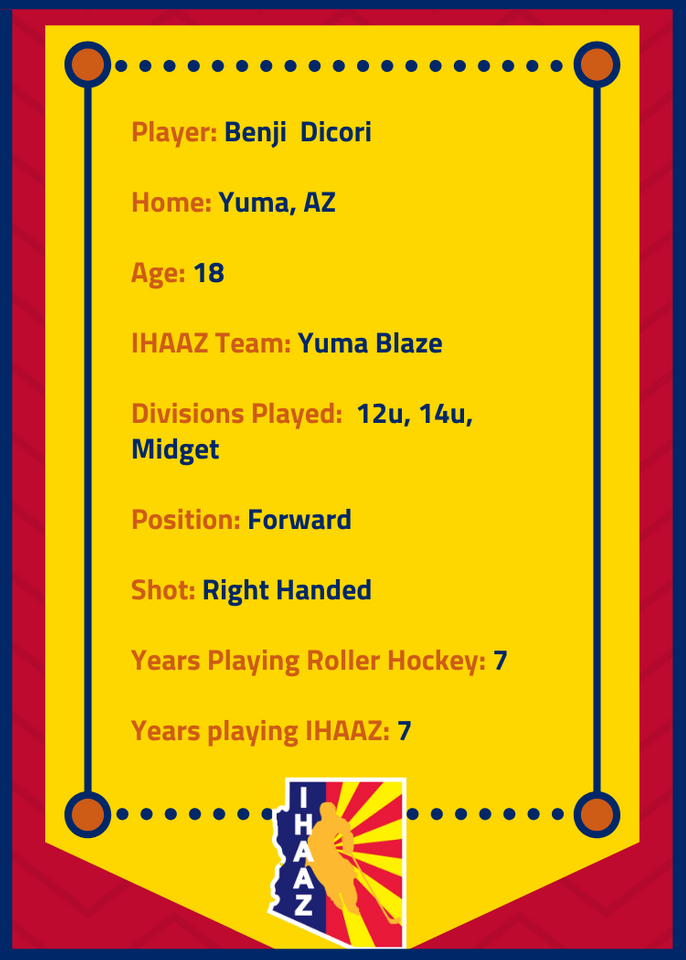 WE ASKED Benji  A FEW ADDITIONAL QUESTIONS TO THOSE  ANSWERED ON HIS IHAAZ CARD, ABOUT HIMSELF AND HIS BROTHER HERE'S WHAT HE HAD TO SAY:

Benji: Barney's because you can actually stop on the rink and it's not really hot.

Benji: Isaac Lopez because it’s fun to tease him about all the times he messes up.

IHAAZ: What teammate has motivated you the most in your IHAAZ years:

Benji: Logan Estes because he always tried to make us better and made us work harder. He used to make us skate extra laps after practice even if we were drenching in sweat and super tired.

IHAAZ: You've been playing for 7 years. What got your started playing roller hockey?

Benji: I don’t remember it but I know it would’ve had to have been when I played on the 14u B team as a 12yr old.

IHAAZ: What's your greatest IHAAZ accomplishment either as an individual or along with your team? Tell us why you feel this way.

Benji: The year we won the high school championship was pretty cool. That whole year in general holds some of my greatest and fun memories of playing roller hockey with my friends.

IHAAZ: A lot goofy stuff happens on and off the rink, what's your funniest IHAAZ related story?

Benji: At state finals one year Nick Johnson ate like 3 or 4 ice cream sandwiches before a game and still went out and played a super physical game without throwing up or slowing down at all.

Benji: I think either my leadership or hockey IQ. While I make a lot of boneheaded mistakes, 1/10 times i’ll make a good play and that feels pretty cool. I do want to get better and shooting because I rarely if ever score a goal with my shot because it is just not great.

IHAAZ: This is the siblings Spotlight edition so we're going to be asking you some sibling related questions so we'll just start out with the one that's sure to provide some fun: Who's the better hockey player, you or your brother?

Benji: Trevor for sure, the kid is gonna be a stud when he stops being slow and he finally grows a little. Taylor (the oldest Dicori brother who aged out of IHAAZ in 2018) was good at being physical and making the right plays but we always made fun of him for his offensive skill set.

IHAAZ: We have to assume with all the "stay at home" that's had to go on, a one on one game has had to have happened... if so who won? (and remember we're going to ask them the same question).

Benji: Me and Trevor play mini hockey in the house a lot. Trevor normally plays goalie and he normally wins. I’m able to beat him in pool basketball almost always though.

IHAAZ: Have you and your brother played on the same team before in IHAAZ or otherwise? If so, how did it go?

Benji: I think they would love my hands and they would criticize my long stick. Normally people don’t like how long my arms and stick is because i’m able to get up close and personal while also staying far away and that really affects their puck handling.

Here's what Trevor actually answered to these two questions: "I like the power and accuracy of his shots and really I don't have anything to criticize about him but I guess his speed could be faster ."

IHAAZ: Do you watch you brothers IHAAZ games when they play? If so, do you do it to cheer them on to to later criticize their play?

Benji: I would say a little bit of both. I’m very proud of both of my brothers play and if i’m criticizing them i’m trying to help them be better in certain circumstances of the game, and not just trying to mean and say their not good.

Benji: Our rink is closed by the city so we play mini hockey a lot and we go swimming. I work a lot and when I'm not working I play video games or sleep. Trevor just plays video games all day and all night. You wouldn’t even know he lived there except for him screaming at his games sometimes.

Benji: Traveling and hanging out the team is always a blast. This year’s team had a lot of good personalities on it and it was always fun to be around them and just goof  around. It was also my senior year so not being able to play this year was kinda upsetting to not get to play one last time.

WELL GOOD NEWS BENJI, YOU AND THE OTHER HIGH SCHOOL SENIORS WHO LOST OUT ON SOME OF THEIR SEASON WILL STILL GET A CHANCE TO COMPETE FOR ONE LAST STATE FINALS CHAMPION TITLE!

CHECK OUT THE DETAILS HERE